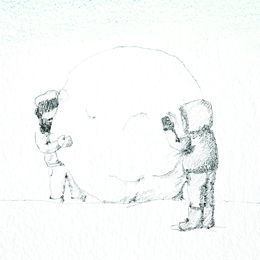 La boule de neige is a winter’s and canadian landscape allegory, the vast territory where the presence of men is an exception. At the same time  It serves as a testimony of my enjoyment during the time I stayed there with a grant..

The initial intention was to create an object that could accommodate multiple references and that, in a way, continued my operative model in works that are consum- mated by accumulation and effort.

Consequently, the idea of a giant snowball created by a group of people seemed perfect. Nevertheless, the weather in Canada during my stay prevented me from carrying it out appropriately, despite having gathered the people to perform the action. I wanted them to be people who were close to me, with whom I could tackle this ephemeral, romantic project that is nothing but a metaphor of the value of group achieve- ment.

Back in Spain I wanted to reflect the whole experience, so I decided to draw a mural. It allowed me to remember step by step those wonderful days I spent in Canada.